She couldn’t trust me as far as she could throw me. We were four days in of a five-day battle, and it was taking its toll on both of us.  We eyed one another with certain wariness.  Would she concede or would I just give up trying?

I had been asked to provide care for the elderly and frail Helena for a week while her regular caregiver was away on vacation. Although I’d spent some time getting to know her routine, there were certain features of her regular gal that couldn’t be duplicated.

It didn’t help that her near-six foot frame towered over mine.  Add to that Parkinson’s disease, and a myriad of other maladies which I soon learned, included anxiety.

I attempted to guide her and her walker a mere three metres from her dressing room to the shower. It was more of an athletic feat than part of one’s morning routine.  She didn’t care that I had worked providing physical exercise and training to seniors for over thirty years; she balked at the simplest of instructions.

“No, no, no!!” she shrieked, grasping at anything within reach.  “You’re going to let me fall!”

Trying to maintain a sense of calm, I responded softly, “No, Helena.  I will not let you fall.  I promise.” 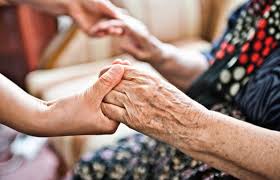 She wanted to believe me, she had said, but she couldn’t.  The day prior while helping her outside to enjoy her breakfast overlooking the lake, she’d had a freezing episode, a common occurrence with Parkinson’s sufferers.  Her legs had buckled and things were quickly heading south, both literally and figuratively.  ‘Not on my watch’  had been my mantra when it came to falls and other calamities in my work with seniors, so I used every ounce of strength I could muster to keep her upright, pushing the walker out of our way so she could rely on me alone to guide her down the step to the field stone terrace.  We made it safely, but we were both trembling, and I was drenched in sweat from my efforts.

Her look said it all.  “Thank you, Monica.” I knew I had been dismissed.

That was the previous day, and this one wasn’t turning out much better.  We made it as far as the shower room and she decided that she ‘just couldn’t today.’   I knew it wasn’t about being too tired.  I had learned enough about Helena to know that she loved her shower; the steaming hot needles of  the water pelting her painful joints and having the shampoo vigorously massaged into her scalp were the highlights of her morning.  She just didn’t trust me to get her safely over that one tenuous step into the shower. I pondered the dilemma of how I could assure this woman who, if she would just trust me, lean on me, would not fall.  The voice in my spirit immediately said,  “Let me know what you come up with, Monica”

Huh.  Yet another teachable moment.

I know that you cannot be made to trust someone–even God. We go based on past experience, and if you haven’t given Him enough of an opportunity to prove Himself, there won’t be much to draw on from your memory banks.

As with Helena, despite my best efforts, she didn’t have enough experience to make the decision that I was not going to fail her either.  We came to a compromise and I gave her a sponge bath where she could sit on the shower chair and feel secure without having to take that one step that held her in fear.  Singing softly (something I do when I need to find my own happy place), I could feel her relax as I massaged lotion into her back, her head falling forward in surrender.  I was realizing that it was not for me to feel like a failure, nor that somehow there was something inherently wrong with me that I couldn’t be trusted.  I knew I was competent and trustworthy.  She just didn’t know it-yet.

God too, is more than competent and trustworthy.  We can’t make Him feel insecure about His abilities, but He longs to show us His goodness if only we’ll let go of our own crutches and props.

“I cried out, ‘I’m slipping!’ but Your unfailing love, O Lord, supported me.”

4 thoughts on “The Trust Factor”